David shouldn’t have to feel bad when he misses a workout, because he probably burns more calories and gains more muscle working on this house than I do during my Peloton workouts. Last Saturday, he finally brought up the cabinets for our laundry room.  This excites me because it cleared some space in our dumpster…I mean…garage and it means more progress in the laundry room. Of course, we had to come across some issues though.

Our contractors did the drywall and the plumping, electrical, and venting for us.  They had to build a false wall which in reality is a brilliant idea.  However, instead of putting the washing machine outlet box deeper into the wall, they put it over the wall. There are two problems with this.  The first problem is that because it’s built over the wall, everything from the machines connecting to the box sticks out really far, so we can’t put either the washer or dryer against the wall.  Instead, they are pretty far, which creates an awkward gap that we will have to cover up by getting a deeper counter.  The second problem is that the box is extremely high.  We want to put in wallpaper or tile, but the box is fairly large and kind of looks random and out of place. It should have been put in lower so it can’t be seen.  David was able to fix it a little, but not enough to make a huge difference.

The other minor issue we came across is more of a David mistake than the contractors.  He pre-measured the space but didn’t account for the moldings and trim in some areas, and that messes with the measurements for the cabinet space, specifically for one cabinet.  The cabinet between the dryer and the window is supposed to have drawers instead of doors, but once the window trim is in, there is no way that the drawer would be able to open. We thought that we could do some messing around with spacing, but ultimately decided to rearrange where each cabinet goes and it completely solved our problem.

We now need to build a base for the cabinets to go on, so that they are level with the washing machine and dryer.  We are eventually going to put in a counter, and want it to be one surface instead of having two different levels.  This weekend we went to pick out counters, and left with about 50 samples. Oy!!

I really feel like this room is coming together, and will hopefully make doing laundry more enjoyable for me, since I feel like I do it 12 hours out of my day. Hah! 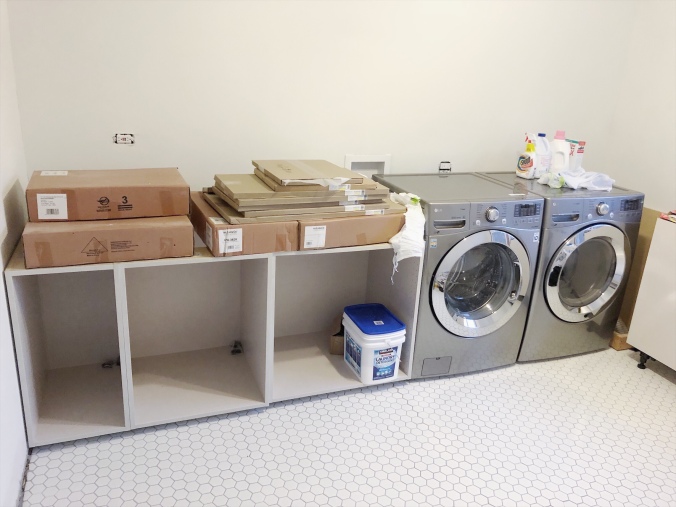